In today’s digital age, it’s no secret that social media can have strong effects on our mental health. The truth of the matter is, however, is that most of what we see on social media simply isn’t true. Filters on Snapchat and Instagram, in addition to the myriad photo editing apps available on all smartphones, are distorting the way society sees each other, and in turn, is causing users to want to change the way the look in real life. 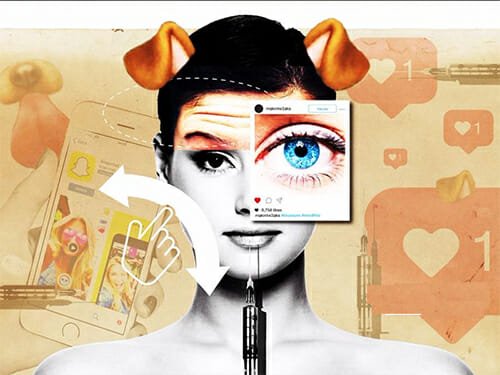 It’s been referred to by doctors and scholars as both facebook facelift and Instagram Dysmorphia, but the two terms are referencing the same thing—social media users who turn to plastic surgery to look as good in real life as they do online. It is a real phenomenon that is affecting demand for plastic surgery, expectations, satisfaction, and overall happiness.

Image editing started with print magazines where models have special lighting to look their best, then later by having their photos touched up electronically. Now, everyone has access to image editing software allowing them to change photos before they post to social media. I have watched people remove blemishes, make themselves taller, and make themselves skinnier with imaging software on their phones right before my eyes. This creates unrealistic goal as it becomes difficult to meet your followers socially as you look different.Consumers are now coming into plastic surgery offices  asking to look like the images they see online, not realizing that those images likely have been altered and do not reflect reality.Another reason to seek plastic surgery is that stills can be edited but videos cant be edited that easily.

Image manipulation has increased demand for plastic surgery since more people are seeing altered photos of others and comparing them to photos of themselves. “Although you would think that is good for business, it unfortunately creates unrealistic goals for patients leading them to be disappointed when their surgeon either informs them that the result is unrealistic or provides them with a surgical result that does not match the edited photo.”

The trend is growing as social media, along with online dating, has today become the common trend. The way one looks online is considered to be the first impression of one’s overall image and personality.Young women mostly opt for rhinoplasties or nose jobs, lip injections or brow lifts, while young men prefer laser treatments to remove unwanted hair and scars & hair transplant.

Women also go for chemical peeling, botox and body contouring to get those attractive looks. The people coming for such treatment are in the age group of 20-40 years and the majority of them are in their late 20s or early 30s. This treatment helps in having a more attractive and striking look from a social media perspective.