In general, IT adoption in healthcare systems followed the same pattern as other industries. When institutions started using new technology in the 1950s to automate highly standardized and repetitive tasks such as accounting and payroll, healthcare payors and other industry stakeholders also started using IT to process vast amounts of statistical data. The second wave of IT adoption arrived twenty years later. It did two things: it helped integrate different parts of core processes (e.g. manufacturing and HR) within individual organizations, and it supported B2B processes such as supply chain management within and outside individual industries for different institutions.This second wave of IT adoption helped bring about, for example, the electronic health card in Germany as regards its effects on the healthcare sector. It also served as a catalyst for the United States Health Information Technology for Economic and Clinical Health Act— an effort to promote the adoption of health information technology— and the United Kingdom’s National Health Service IT Program. Regardless of their immediate impact, these programs have helped to create a powerful and important infrastructure that will certainly be useful in the future. 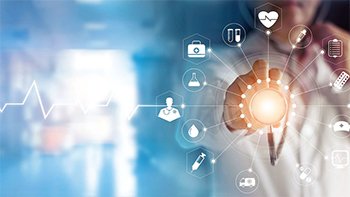 Many private and public sector institutions have already moved to the third wave of IT adoption— full digitization of their entire business, including digital products, channels, and processes, as well as advanced analytics that allow for completely new operating models. No longer limited to helping organizations do a certain task better or more efficiently, digital technology has the potential to affect every aspect of business and private life, enabling smarter choices, allowing people to spend more time on tasks they consider valuable, and often transforming the way value is created fundamentally. What will healthcare look like this third wave of IT adoption?

Healthcare industry players were relatively successful at the first and second waves of IT adoption— and benefited from it. But they struggled to manage the myriad stakeholders, regulations, and privacy concerns needed to build a fully integrated IT system for healthcare. This is partly because IT adoption’s first and second waves focused more on processes and less on patient needs. Nevertheless, programs such as the N3 communication network in the United Kingdom and the secure telematics platform in Germany have created powerful infrastructures capable of supporting the third wave of digital healthcare services— but only if stakeholders take the appropriate next steps.

Now that patients around the world have become more comfortable using digital networks and services, even with complex and sensitive issues such as healthcare (successful DrEd, PatientsLikeMe, and ZocDoc websites are just three examples of this trend), we believe that the time has come for healthcare systems, payors, and providers to go “all in” with their digital strategies.