Healthcare AI applications and examples hold the promise of affordable healthcare, improved success rates, effective clinical trials, and improved quality of life. The early detection of diseases including cancer and retinopathies can and is already improving with AI. Using AI in mammogram and radiology image analysis and review can speed up the process up to 30 times with 99 percent accuracy. Stanford University published a study in 2017 that describes the successful use of AI algorithms to detect skin cancer against 21 dermatologists being diagnosed. In a collaborative study with Moorfields Eye Hospital, London, UK, Google’s DeepMind technology successfully trained a neural network to detect more than 50 types of eye disease by analyzing 3D retinal scans. The greatest advance of this study over its predecessors is how the computer reached some of the interpretations. Overcoming a previous black box of data interpretation and inference strengthens this application’s reliability and confidence. 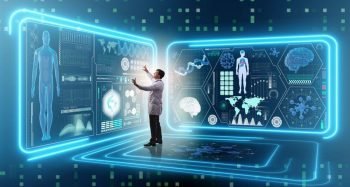 Most importantly, the benefit of combining the powers of the AI algorithms with the powers of the physicians should be acknowledged and emphasized. A competition for computational systems was held at the International Symposium on Biomedical Imaging to detect metastatic breast cancer from biopsy images. While the winning program made the diagnosis with a success rate of 92.5 percent, this number increased to 99.5 percent success when combined with the opinion and expertise of human pathologists.

AI has mobilized the automation of administrative jobs that can help doctors and nurses collect, record, and long-term storage data in their routine jobs. By getting rid of the repetitive parts of a doctor’s job, AI could regularly assist the caretaker’s patient availability.