MammoAssistTM categorizes a mammogram as per the American College of Radiology BIRADS Scoring protocol and generates a detailed report based on radiologic parameters including Breast Parenchymal Composition, Calcification, Lesions, Lymph Nodes, Architectural Distortion all of which are of critical significance in the early detection of breast cancer

Telerad Tech (www.teleradtech.com), a global healthcare technology company, today announced the launch of a new AI-Powered product – MammoAssist to detect early-stage breast cancer as a Make in India Initiative. MammoAssist analyzes a mammogram and processes the imaging data to recognize radiologic features of early stage breast cancer and categorizes it for BIRADS Scoring with a full-fledged structured template. This template is then made available to a radiologist who corroborates/validates the mammography findings and issues the official report. 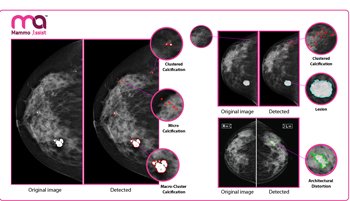 As per the Ministry of Health and Family Welfare (MoHFW), breast cancer ranks as number one cancer among Indian females with an incidence of 25.8 per 100,000 women with 50% survival rate. The primary reason of mortality is late detection. In urban areas, 1 in 22 women is likely to develop breast cancer during their lifetimes as compared to rural areas where 1 in 60 women is likely to develop the disease. Governments in India and globally are under huge pressure to improve this situation in a cost-effective manner. MammoAssist is a cost-effective solution to the above growing problem as it acts as a catalyst for radiologist to review mammograms in minimal time. It can reduce the costs of mass screening programs.

“MammoAssist can play a significant role in breast cancer screening programs to eliminate negative cases with high degree of accuracy and categorizing benign and malignant cases with fully structured report with BIRADS Score in multiple languages. Our studies have shown that MammoAssist can improve the efficiency and productivity of a radiologist by more than 50%. We are highly committed to improve the patient care through artificial intelligence and deep learning in the clinical environment and are targeting to release more than 40 algorithms for radiology diagnosis by 2019” says Mr. Prashant Akhawat, COO of Telerad Tech.

MammoAssist powers Telerad Tech’s Next Generation AI Enabled RIS-PACS Platform RADSpa. RADSpa is deployed in more than 25 countries and has been used to process more than 20 million studies. RADSpa is FDA approved and CE certified.