To lighten the burdens of hearing loss, bioengineering researchers are working with a new generation of hearing devices that use light instead of electricity to trigger an auditory response. Surpassing the performance of cochlear implants, proponents of this technology believe light-based approaches could be a major step forward in hearing prosthetics. 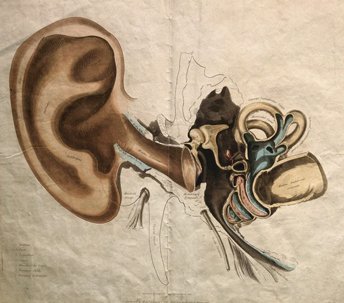 Optical stimulation may be the breakthrough to increase the frequency resolution of cochlear implants and make them a more universal solution. There are two primary approaches being taken for optical cochlear implant engineering. One method combines the gene reprogramming technique known as optogenetics with a fibre-optic-based device that carries light pulses into the cochlea from a remote light source while the other major approach involves the use of near-infrared laser beams to recreate the sound experience by manipulating fluid within the cochlea.

We previously talked about how the first method is being brought to life. While that is in progress, other groups are fine-tuning optical cochlear implants that don’t require the reprogramming of genes. To achieve infrared neural stimulation (INS), Claus-Peter Richter, an otolaryngology professor and principal investigator at Northwestern University’s Auditory Research Laboratory is pioneering an approach using pulsed near-infrared lasers and fibre-optic implants. Auditory neurons are stimulated in their native state in this approach as the laser pulses rapidly increase the temperature of the fluid within the cochlea, causing a portion of it to expand. The sound wave generated by the expansion stimulates the hairlike sensory receptors in the inner ear, which then transmit signals via the auditory nerve to the brain.

A team of bioengineers at the Centre Suisse d’Electronique et de Microtechnique (CSEM, Neuchatel, Switzerland) are developing a fully implantable single-channel optoacoustic device building on those ideas which is powered by a rechargeable vertical cavity surface-emitting laser (VCSEL).  Positioning the laser source directly within the cochlea delivers higher-intensity stimulation, which increases the likelihood of producing audible sound.

Like what you read? Keep coming back to know about everything latest in medical technology.