The healthcare science and technology has developed a lot. However, the systems that store healthcare data still lack technical advancement. That makes them the most vulnerable to ransomware attack. 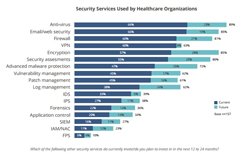 The WannaCry ransomware attack on the U.K.’s National Health Service (NHS) in May, 2017 left it devastated for an entire weekend. It locked organizations and doctors from accessing any patient information unless the ransom amount was paid. Causing a global financial and economic loss of about $4 billion, the attack set the healthcare data security measures in greater motion.

According to Ponemon Institute estimates, data breaches cost the healthcare industry $6.2 billion in 2016. A total of 364,000 patient data was stolen in March, 2017 alone. A vast majority of them have been the result of ransomware attack. Since the software being used on the system lacked security patches and updates, they became easy targets.

What makes the healthcare data an easy target is its sensitive nature. It contains a patient’s updated medical records as well as certain financial information. A hospital is more likely to succumb to a hacker’s demand who plots the ransomware than compromise such information. A ransomware called Locky took computers belonging to the Hollywood Presbyterian Medical Center in Los Angeles hostage last year. They had to pay the $17,000 to the culprits in order to keep the information safe, which was hacked for a week.

In 2014, people behind the CryptoLocker strain of ransomware made some $27 million in just six months. The estimate was released by FBI. The data security is then entirely in the hands of the organizations, who need to take appropriate measures to curb ransomware attacks.