India is now free from ‘infective trachoma’, and termed this as a momentous achievement said JP Nadda, Union Minister of Health and Family Welfare  while releasing  the National Trachoma Survey Report (2014-17). He stated that the survey findings indicate that the active trachoma infection has been eliminated among children in all the survey districts with overall prevalence of only 0.7%. This is much below the elimination criteria of infective trachoma as defined by the WHO- active trachoma is considered eliminated if the prevalence of active infection among children below 10 yearsis less than 5%, he added. Minister of State (HFW), Anupriya Patel was also present at the release of the Survey Report. The Health Ministers congratulated all the people associated with the survey, especially the frontline health workers who have worked often in try conditions to conduct the survey. 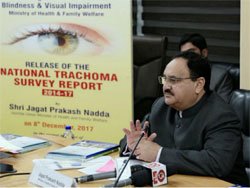 The Union Health Minister stated that the Survey results indicate that active trachoma is no longer a public health problem in India. We have met the goal of trachoma elimination as specified by the WHO under its GET2020 program, he said. This has been possible due to decades of inter-sectoral interventions and efforts that included provision of antibiotic eye drops, personal hygiene, availability of safe water, improved environmental sanitation, availability of surgical facilities for chronic trachoma, and a general improvement in the socio economic status in the country, he added. Minister  emphasized the need for constant surveillance by the states to report any fresh cases of trachoma and trachoma sequelae(TT cases) and to treat them promptly to finally be completely free of trachoma.

At the release of the Survey Report, Nadda stated that it is our aim to eliminate trachomatoustrichiasis from the country. States which still report cases of active trachoma need to develop a strategy for community-based case finding of patients of trachomatoustrichiasis (TT). These cases must be provided free entropion surgery/ treatment in local hospitals, he stated. He further said that a careful record of each case identified and its management status must be maintained as per the WHO Guidelines. Also, adequate surveillance of the disease must be done all over the country in order to certify India as trachoma free (eliminated). Monthly data on indicators of trachoma surveillance as per WHO guidelines must be regularly sent to the NPCB, he urged the states.

Speaking at the function, Anupriya Patel, Minister of State (Health and Family Welfare) stated that findings of the survey are extremely encouraging. Congratulating the team, Anupriya Patel said that Active Trachoma is no longer a public health threat. She further said that surveillance has to go up along with regular monitoring for completely eliminating trachoma from the country.

Trachoma (Rohe/Kukre-रोहे/कुक्करे) is a chronic infective disease of the eye and is the leading cause of infective blindness globally. Trachoma is a disease of poor environmental and personal hygiene and inadequate access to water and sanitation. It affects the conjunctiva under the eyelids. Repeated infections cause scarring leading to in-turning of the eyelashes and eyelids. This further causes damage to the cornea and blindness. It is found affecting the population in certain pockets of the States of North India like Gujarat, Rajasthan, Punjab, Haryana, Uttar Pradesh and Nicobar Islands. Trachoma infection of the eyes was the most important cause of blindness in India in 1950s and over 50% population was affected in Gujarat, Rajasthan, Punjab, and Uttar Pradesh. It was the most important cause of corneal blindness in India, affecting young children.

The National Trachoma Prevalence Surveys and the Trachoma Rapid Assessment Surveys were conducted by Dr. Rajendra Prasad Centre for Ophthalmic Sciences, All India Institute of Medical Sciences, New Delhi in collaboration with National Program for Control of Blindness & Visual Impairment, Union Ministry of Health and Family Welfare from 2014 to 2017. This was conducted in 27 high-risk districts across 23 states and union territories. Trachoma Prevalence Surveys were done in 10 districts selected from the previously hyper-endemic states. Under the survey, 19662 children in 1-9 year age group were examined by trained ophthalmologists. As many as 44135 persons were examined among the 15yr+ age group. The Trachoma Rapid Assessment Surveys (TRA) was done in 17 other districts from other parts of the country in places where trachoma cases have been reported, which were not previously hyper-endemic.