The first international conference and exhibition on AYUSH and wellness systems,International Arogya 2017, is being organized in Delhi from December 4-7, 2017 by FICCI in collaboration with Govt. of India’s Ministry of AYUSH and Ministry of Commerce & Industry, and Pharmaexcil. 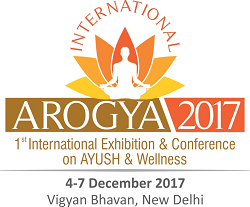 The four-day event will showcase the strength and scientific validation of traditional Indian systems of medicine in the global context, including Ayurveda, Yoga and Naturopathy, Unani, Siddha, Sowa-Rigpa and Homoeopathy (AYUSH), and facilitate their worldwide promotion, development and recognition.

Thousands of delegates from India and abroad, as well as over 200 Hosted Delegates from more than 60 countries – including importers, regulators and Government officials — will attend the show. More than 250 manufacturers of alternative medicine will showcase their products and services. The mega event will bring key stakeholders of AYUSH sector under one roof, help boost exports of AYUSH products, and showcase latest research and developments in alternative medicine systems of India.

Said Vaidya Rajesh Kotecha, Special Secretary, Ministry of AYUSH, Govt. of India: “The National Health Policy 2017 has strongly advocated mainstreaming the potential of AYUSH within a pluralistic system of Integrative healthcare. It uses a new language of ‘medical pluralism’ and re-emphasizes the need for integrating AYUSH in the National Health Mission, research and education. There is sufficient momentum now through various initiatives and tremendous support from all quarters to bring the traditional medicine systems to a higher pedestal in healthcare. With International Arogya 2017, I am happy to see all stakeholders coming together to further this cause.”

Shri Vinay Mathur, Deputy Secretary General, FICCI, added: “India has a long history of using traditional medicines in healthcare, and developing them with modern scientific outlook. We are witnessing a highly receptive environment where the value of AYUSH systems is widely recognized worldwide, translating into growing global demand. A slew of reforms in administration, research strategies, nature of practice and education are underway, leading to heightened interest in the AYUSH system of medicine, both in India and abroad. India is already a major exporter of Ayurvedic and alternate medicines in the world, and the scope of growth is huge. The global herbal market is estimated to reach $5 trillion by 2050, up from the current level of $62 billion. Events like International Arogya will go a long way in enabling India to actualize this potential and take global leadership role in alternative medicine systems.”

A major highlight of International Arogya 2017 will be Indian CEOs’ Roundtable, chaired by Shri Shripad Yesso Naik, Hon’ble Minister of State (Independent Charge), Ministry of AYUSH. The event will also host sessions built around themes like: Enhancing the export potential of AYUSH; Business opportunities in integrative healthcare; Building a brand strategy; Standardization and quality control in AYUSH sector; and a workshop on essential herbal raw materials required in AYUSH Industry.

A FICCI and Frost & Sullivan Knowledge Paper titled “AYUSH for the World: Market Access Handbook” will be released. International regulators from ASEAN and BIMSTEC countries, Canada and Switzerland will meet Indian regulators and industry leaders. There will also be a meet of medicinal plant cultivators. Visitors will be offered free health check-ups and consultation, lectures and counselling by specialists of Ayurveda, Yoga & Naturopathy, Unani, Siddha, Homoeopathy, Prakriti Pariksha and Nadi Pariksha.