69.1 million people in India are suffering from diabetes, according to the International Diabetes Federation South-east Asia. Early detection and intervention is vital in managing not just diabetes, but several other co morbid complications that come with the disease. Thus it is important today to initiate various program to generate awareness about the disease among all. 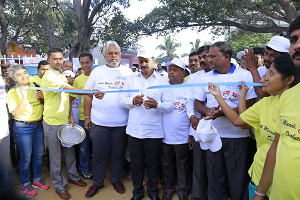 On 12th November, 2017 Columbia Asia Hospital, Whitefield in association with FORCE-GW (Federation of Resident Welfare Association, Communities and Establishments of Greater Whitefield) organized a Diabetes Walkathon. The walkathon aimed at creating awareness among people about diabetes and brought various communities together in the area.

Around 1500 participants attended the event.

The Walkathon was started at Seegehalli Government School, Whitefield-Hoskote Road and covered the following routes on the way.

“We had an astonishing Walkathon. I was humbled by the commitment to spread awareness of Diabetes with over a 1500 people participating. We are grateful to everyone including our Premier sponsors Columbia Asia Hospital Whitefield. We are very hopeful that we will now be able to continue the Walkathon as an annual event.”” said Mr. Lingaraj Urs, President, FORCE GW.

“Diabetes is a major concern today. However, the good thing is that diabetes is majorly a lifestyle disease that can be managed well, by modifying your way of living. Unfortunately, not many are aware of the early signs and symptoms of this disease, forget alone lifestyle modifications. This walkathon was our small step towards generating awareness about the disease, especially among people living in, around and in the outskirts of Whitefield,” said Ms. Pratyush Srivastava, General Manager, Columbia Asia Hospital, Whitefield.

As part of this endeavour, we also had organized for free random blood sugar test, where 500 people, mainly locals participated, he added.

Residents from greater Whitefield, children from five local schools of Whitefield and Force GW and Columbia Asia Hospital’s team were present at the event.