October is celebrated as Breast Cancer Awareness Month to increase the awarenesson the disease. While most people are aware of breast cancer, many forget to take the steps and chalk out a plan to detect the disease in its early stages and encourage others to do the same.

The drive ‘I commit to be healthy’ was divided into two phases; one was the doctor’s talk on breast cancer awareness and preventive measures. The other was signing the pledge to fight against breast cancer. In one of the most compassionate examples of expressing support and solidarity towards creating awareness on breast cancer among general public in Mumbai, over 700 people comprising of males and females across age groups and professions came together and signed the pledge. 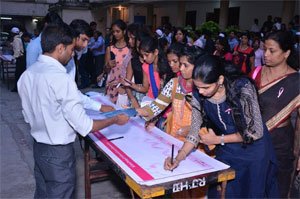 The initiative was flagged off by Mr.Amol Naikawadi, Joint Managing Director, Indus Health Plus. The enthusiastic crowd gathered at SNDT College, Churchgate wherein the people signed the “ITakePledgeForBreastCancerPrevention” banner. The awareness drive kick started by a doctor session on breast cancer which emphasised on timely and regular preventive health check-up to reduce the risk of breast cancer among females.

Addressing the occasion Dr. Navin Gupta, MBBS said, “It is very important that every woman must learn and undergo a monthly self-assessment procedure, which is quick and very simple to do. She can do it once a month after her bath. This can pick small abnormalities and make her alert of any unusual changes in her breast.”

Breast cancer is one of the most dreaded maladies in India and increasing amongst women of younger age. Irregular lifestyle changes are adding to its numbers year on year. Our reports have observed that most of the detections amongst women are a result of laid back attitude and negligence towards one’s health. It is imperative for women to also be equally preventive and know her health. Breast Cancer is completely curable if detected at an early stage.

Amol Naikawadi, Preventive Healthcare Expert from Indus Health Plus said, “Breast Cancer in Maharashtra has equally been a concern. The change in lifestyle has brought in several elementary issues like obesity and hypertension which are the major risk factors of breast cancer. One can minimize the risk factors by making moderate changes in their lifestyle. Not all know about the risk factors, and those who know are too shy to come forward. We are consistently trying to spread awareness and also emphasizing on mammography as an important test to detect the possibility of breast cancer at an early stage for those above 40 years of age and adopting the habit of regular and timely check ups.”

This month long prevention drive commenced on 01 October, 2017 in Mumbai and will be going to touch upon several other cities to spread awareness on prevention of breast cancer.