Sept 21-9-2017: Often you must have come across elderly with memory loss that disrupts daily life. There are some who face challenges in solving problems or difficulty in planning familiar tasks. If these are occasional problems then it could be age related changes. If not, then these are symptoms of Alzheimer Disease (AD). As per King’s College London’s World Alzheimer Report 2015, there are more than 9.9 million new cases of dementia each year worldwide, implying one new case every 3.2 seconds. 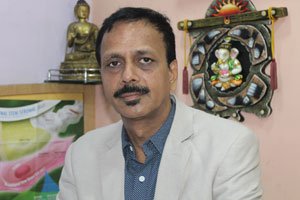 Alzheimer’s disease is a neurodegenerative condition that gradually destroys memory and thinking ability and, eventually, the ability to carry out the simplest tasks. Affected individuals may also develop confusion with time or location while few others may have poor judgement of things and frequent change in moods. Symptoms first appear generally in individuals above 60 years of age and AD is the most common cause of dementia. It often leads to behavioral symptoms, inability to combine muscle movements, jumbled speech, or loss of appetite.

Behavioural changes such as aggression, agitation, difficulty with self-care, irritability, meaningless repetition of own words, personality changes, restlessness, lack of restraint, or wandering away randomly and not being able to find way back are often seen. This is because the brains cell connections and the cells themselves degenerate and die, eventually destroying memory and other important mental functions.

The sad part about this disease like many others is that in the early stages the condition is almost unrecognizable. In the beginning, the patient may forget words and misplaces objects. The early stages do not interfere with ability to work or live independently.  In later severe stages, the patient loses memory to the extent that he/she cannot remember even basic abilities such as eating, walking, sitting etc.

Currently, there is no cure for Alzheimer’s disease and management only includes supportive care and medications. “Cellular therapy is making innovations and attempting newer heights in the field of science and making possible treatments for conditions that was difficult to treat earlier. Damaged nerves were earlier considered to be difficult to treat, but regeneration of these nerves is possible with Cellular therapy(with the help of cells taken from one’s own body) . As stem cells exist in the brain, it helps repair neurological damage. With the help of a personalized holistic treatment plan encompassing cellular therapy, memory tasks to boost mental health as well as physical exercises and diet modifications treatment is offered,” said Dr. Pradeep Mahajan, Regenerative medicine researcher, StemRx.