The active efforts and cooperation of Senior Shiv Sena MLA Shri Ajay Choudhuri and Dean of KEM Hospital Dr. Avinash Tupe proved to be highly instrumental in ensuring that the camp was a resounding success. 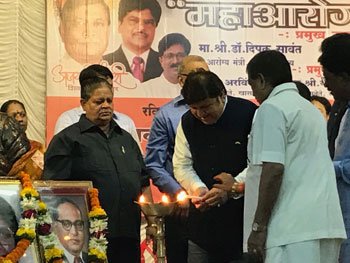 More than 600 people attended the camp and availed of the free diagnostic and counseling services.

“Generally, monsoon is known as a season when a majority of life-threatening diseases originate. If not diagnosed and treated on time, they can prove to be fatal. As part of our commitment to broader community healthcare initiatives, we partnered with KEM Hospital to provide free medical services to people from the weaker sections of society. Bringing a cross-section of the population within the institutional healthcare framework and initiating a broad-based nationwide disease control program remains our core guiding principle,” stated Shri. Viral Gandhi -Managing Director of Voxtur Bio Ltd.

Voxtur Bio has been actively involved in organizing public health camps in the past and conducting health awareness programs. It has held health camps at Mallapuram and Calicut in Kerala. The company is also in plans to organize a health camp next week in Kerala in association with Amrita Institute of Medical Sciences (Amrita Hospital). Voxtur Bio will also be holding health camps in Pune and Mumbai next week.