Minister of State (Independent Charge) for AYUSH,  Shripad Yesso Naik inaugurated the World Integrated Medicine Forum on Regulation of Homeopathic Medicinal Products: National and Global strategies in New Delhi today. Speaking on the occasion, the AYUSH Minister said that in India, Homoeopathy has been well institutionalized and we have 235 homoeopathic hospitals and more than 8000 clinics in public sector. He said that most of production plants in India are GMP-compliant and adhere to policies related to quality, packaging and distribution. He further said that all these manufacturing units are bound by Drugs & Cosmetics Law and their renewal of license depends on regular quality check and thorough inspections. 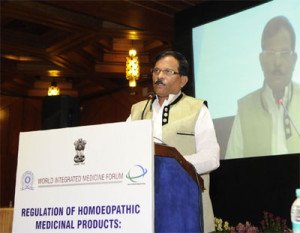 In his inaugural address,  Shripad Naik remarked that there is clearly a need for a high-level strategic exchange platform, where stakeholders can meet outside their immediate work related context and this forum could address that need. In the other countries Homoeopathy remains largely under-utilized due to lack of availability of homoeopathic medicines or stringent or non-existent regulatory provisions for these medicines, the Minister added.

Secretary, Ministry of AYUSH, . Ajit M. Sharan also expressed his happiness that the Ministry, through CCRH, could demonstrate global leadership by hosting this unique event.  Director General, CCRH, Dr. Raj K. Manchanda, hoped that this forum could provide impetus to further dialogues for strengthening regulatory framework worldwide, to assure that the users of Homoeopathy could have wider access to quality-assured homoeopathic medicines. Dr. Robbert van Haselen, Director of the WIMF and also the international consultant for the forum, thanked the Government of India for spearheading this challenging task of bringing together the regulators and homeopathic industrialists from so many countries on a common platform to exchange their concerns and issues.

On this occasion an MoU was also signed between Homoeopathic Pharmacopoeia Convention of the United States (HPCUS) and Indian bodies – Pharmacopoeia Commission for Indian Medicine & Homoeopathy (PCIM&H) and Central Council for Research in Homoeopathy (CCRH) on cooperation in the field of Homoeopathic Medicine.  It is hoped that this agreement will be a benchmark for many more agreements to follow with the aim to develop and harmonise homoeopathic pharmacopoeias and to strengthen regulatory provisions for homoeopathy in the whole world.

The two day event is organised by Ministry of AYUSH and  Central Council for Research in Homeopathy (CCRH) and supported by Pharmacopoeia Commission for Indian Medicine & Homoeopathy (PCIMH) & Central Drugs Standard Control Organization (CDSCO). This is the first-of-its-kind forum considering the increased perception of the international world towards India as a key player in the progress of the homoeopathy drug industry. Drug lawmakers, regulators, manufacturers and pharmacopeial experts from various regulatory authorities, eminent scientific organisations and pharmaceutical industries  from 25 countries, are participating in the two days forum to strategize the  actionable aspects in the homoeopathic drug industry, which, in turn, will promote global harmonisation in the sector.

Through this forum, regulators from more than 15 countries including France, Germany, Switzerland, Sri Lanka, Bangladesh, India etc .will share the current status, challenges and outlook with regard to the regulation of homeopathic products. At least 15 international industries manufacturing homoeopathic medicines and more than 30 Indian industries are participating and interacted with the drug regulators and controllers. Regulators and drug controllers of various states of India are also particpaing in the Forum. Forum discussions will explore the commonalities as well as differences in regulatory affairs among various countries. The common concern is how to promote regulatory practices that met the highest modern standards, whilst at the same time respected the unique tradition of homeopathy worldwide.

Major points of discussion will include current regulatory status in different countries; practices and possible trade opportunities in key countries worldwide; possible solutions to regulatory challenges; building knowledge and network to deal more efficiently with challenges at national and global level and a strategic perspective on the possibilities and limitations of what can be achieved at a national level via further international collaboration and harmonization.

In India, homoeopathic medicines are regulated by Drugs & Cosmetics Act & Rules. All pharmaceutical industries are legally bound to comply with these rules, which, in turn, assures safety and quality of homoeopathic medicines. Further, these industries adhere to Good Manufacturing Practices (GMP) that further assure accredited production, packaging and distribution. In that sense, India has a relatively well-established regulatory framework for Homoeopathy. However, the implementation of these Acts and Rules are sometimes challenging at the end of the pharmaceutical industries, and despite their best efforts to comply, some practical challenges remain that come in their way.

Homoeopathy is one of the most followed medical systems in India and its strength lies in the fact that its medicines are gentle, safe as well as cost-effective. In the era of growing adverse drug reactions and auto-immune and lifestyle-related illnesses, Homeopathy has a crucial role to play in the well-being of mankind. The use of homoeopathy is steadily growing in India and as per an analysis by Ministry of AYUSH, this sector exhibited an annual growth rate of 26.3% in the past year, the highest among the other AYUSH modalities.