The government today signed an agreement with the National Yuva Cooperative Society to set up 1,000 ‘Janaushadhi Kendras’ across the country and targets to open such medical stores in every block and gram panchayat to provide quality medicines at an affordable price. 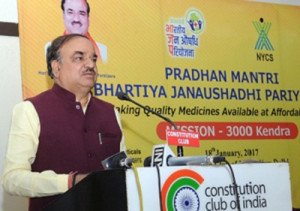 At present, 750 Janaushadhi Kendras, providing more than 600 medicines and 150 medical devices, are operational and the target is to open 3,000 by end of this fiscal for achieving health safety, Chemicals and Fertilisers Minister Ananth Kumar today said.

He was speaking after signing of the Memorandum of Understanding (MoU) between the Bureau of Pharma PSUs of India (BPPI) and National Yuva Cooperative Society Ltd (NYCS) to set up 1,000 Janaushadhi Kendras across the country.

“BPPI and NYCS has signed an MoU to open 1,000 Janaushadhi Kendras across the country from Kanyakumari to Kashmir to Kutch to Kohima under the Pradhan Mantri Bhartiya Janaushadhi Pariyojana (PMBJP) scheme,” Kumar said.

The price of generic medicines sold in the Janaushadhi Kendras is significantly lower than the average rate of leading brands, he said and cited some examples of comparable rates of anti-cancer and anti-diabetic medicines.

Kumar said the quality of the medicines provided in these Kendras would be ‘WHO compliant’.

Kumar informed that the government has signed MoUs for 6,000 Janaushadhi Kendras and it also has 20,000 applications for individuals interested in opening such stores.

“We are in the discussions with the Health Ministry, drug controllers at the central as well as state levels for quick approvals to open Janaushadhi Kendras,” he said.

BPPI is the nodal implementation agency for the PMBJP, which is an an initiative of the Department of Pharmaceuticals under the Chemicals and Fertilisers ministry to make quality medicines accessible to all citizens at an affordable price.

The PMBJP scheme would drastically reduce the out of pocket health expenditure for the common man and give an impetus to the Make in India mission in the pharma sector.

Minister of State for Chemicals and Fertilisers Mansukh L Mandaviya said the government is actively pursuing the goal of ‘Affordable Medicines for All’ through the PMBJP, under which currently there are over 750 stores with a portfolio containing 600 drugs and 154 surgicals and consumables.

There is an active financial support extended by the government to the extent of Rs 2.5 lakh in the form of financial assistance to the Kendras set up in government hospitals and incentives to individuals, with special and softer terms to SC, ST and differently-abled persons.