The surprise move, announced on Tuesday evening, is part of a crackdown on corruption and illegal cash holdings.

The announcement was met with shock in India.Media described the move variously as a “surgical strike” on tax evaders in the country’s overwhelmingly cash-based economy and a “big bang note”. The banknotes declared illegal tender represent 85% of cash in circulation in India. 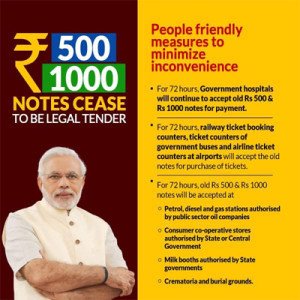 However, some taking this step as big move towards fight against corruption, some are still in shock.

Dr. Rajeev Baudhankar, CEO Bhatia Hospital , “As per notification by Government of India we cannot accept 500 & 1000 Rs notes after 12 midnight of 8th November 2016. Hence legally these notes have become illegal tenders and as such cannot be accepted legally.

Our patients who are in the process of Discharge insist on paying cash as many of them don’t have credit/debit cards. Moreover , accepting cheque  is a risky proposition for the hospital as we have  face many cases in past where cheque has been dishonored .However we have on humanitarian grounds allowed cheques for discharged patients only till next 72 hrs. However our patients are facing huge problem due to sudden development as plenty patients who have came from remote area for treatment and who don’t have credit / debit cards or cheque books. Our services in OPD & Daycare are also hit because of this sudden development”

Whereas, Fortis Hospitals with regard to the recent decision taken by the Prime Minister on Rs500 & Rs1000 currency notes. Stating, At Fortis Healthcare, we are fully supportive of the National priorities set out by the Hon’ble Prime Minister of India. Further to the directives of the Government provided in their press release dated 8th Nov 2016, payments at Government hospitals can be made through 500 and 1000 Rupee denomination notes. In view of the hardship being caused to the large number of patients at private hospitals, we have made an urgent representation to the Government that this exemption should apply equally, for payments, at private hospitals. We are following up with the authorities and hope the Government will step in quickly to resolve this anomaly. Meanwhile, at Fortis hospitals across the country, we continue to accept payments through credit card, debit card and electronic banking  transfers. As 500 and 1000 Rupee denomination notes are no longer legal tender we are only accepting 100 Rs and lower currency notes. As per Government regulation, a PAN card and legitimate ID proof is however required for payments in cash exceeding Rs 50,000. Meanwhile we continue to ensure that emergency cases get immediate medical attention without delay whatsoever and have put in more administrative staff and help desks to assist patients.

Further says, Pawan Gupta, Co-founder, Curofy, “our health-care system which has been cash dependent since years will be thrust-ed into the world of cashless transactions. In a twist of policy, tech-averse medicine will be forced to become digitalised and embrace the winds of change. This will bring the hoarded up cash from the private sector into circulation and give transparency. Private clinics and nursing homes which mainly transacted in cash will have to declare their income. Moreover, patients won’t have to worry about carrying money with them physically as their treatment will be only a swish of card away. This move will also bring down the cost of medical education since the cash component of admission process will be completely obliterated, thereby improving the quality of future doctors. Also, with their money going online, more people will come in the digital health ecosystem. In long-run, all this will improve the quality of healthcare and make it more affordable. Though there might be an initial hitch in the transition, with the government encouraging online and cashless transactions, healthcare will adapt to it over time.”

“Commenting on the demonetisation drive by the government,  Kamal Kumar Johari, Managing Director, Nobel Hygiene said, “It is very bold and welcome move on part of the government, we need such reformative  steps to curb the black money, which is detrimental to the whole economy and legitimate businesses and common man. In healthcare sector you might face lot of hassles while transacting in medical shops and hospitals as the consumer usually pay bills by cash, but this is a temporary phase and we must deal with it for larger good. We have a strong presence on the e-commerce platforms where our consumers can buy the products and follow their hygiene routine for the patients.”