Panchkula residents turned out in encouraging numbers today to donate their blood at a special blood donation camp organized by Paras Bliss Hospital, Panchkula, with an objective of raising awareness among people about the importance of the noble act.

The camp saw participation from 60 people, many of them 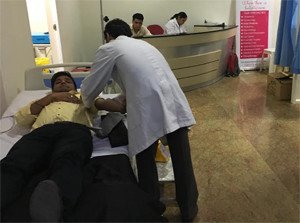 Unfortunately in India, the act of blood donation is yet to become an active culture owing to lack of awareness or sensitization about the condition of patients requiring blood. Many people are reluctant to participate in the activity because of certain myths surrounding the act.

“Some people tend to believe that blood donation would hamper their health. This is far from true. The blood extracted during donation is quickly replenished by the body and most people walk or drive back home without any trouble after donating blood. Another myth surrounding the issue is that a donor is vulnerable to catching infections while donating blood. These myths need to be busted. We need to promote blood donation and encourage people to come forward to help save lives,” said Dr. Rishi Mangat, Unit Head, Paras Bliss Hospital, Panchkula.

Not only is blood donation an absolutely safe and healthy exercise. It also has health benefits for the donor. People with excessive weight can gain by shedding calories. One time blood donation is believed to help the donor shed at least 600 Kcal. At the same time regular blood donations are linked to reduced risk of several life-threatening disease including heart diseases, liver ailments and even cancer.

“In western nations a bulk of blood requirement is met by voluntary blood donations by donors. Many healthy people regularly turn up at blood banks to donate blood to help them meet the emergency requirements of patients. On the contrary blood donation in India is mostly need-based. Most of the time donors who turn up in emergency situations are family members, friends and relatives. We need to work together to develop a culture of voluntary blood donation in India, especially among the youth,” said Dr. S. K. Gambhir, Sr. Consultant Gynecology & Obstetrics.

Sometimes critically ill patients lose their lives because of lack of blood supply, especially of rare blood groups such as AB-, B- and O-. For people with these blood groups, it is even more important to consider blood donation as a moral duty.