CANCER in the most literal term means a group of more than 100 diseases in which cells begin to grow out of control or a disease where abnormal cells begin to grow in an uncontrolled way. According to the National Cancer Institute (NCI) which is part of the US Department of Health and Human Services (USDHHS), every 13th new cancer patient in the world is an Indian. India is also 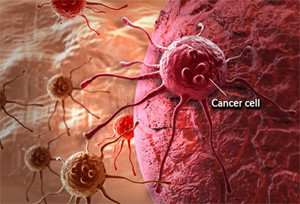 witnessing a steep rise in cancer cases and significantly, more and more people are falling prey to this life threatening disease.

Large number of ageing population, unhealthy lifestyles, use of tobacco and tobacco products, unhealthy diets, lack of diagnostic facilities, etc. are some of the factors that can be attributed to the increase in the number of cancer deaths. The biggest problem behind the rising numbers is that most Indians don’t suspect they may have cancer, or simply they IGNORE the warning signals. Here are the top 5 common cancers that are prevailing in India as suggested by Dr Vikas Goswami, Sr Consultant Oncologist, Fortis Hospital:

1. Breast Cancer: A cancer that forms in the cells of the breasts. Women who have menstruated early, with late or no pregnancies, late menopause, which have not breast fed their babies, are particularly at risk. Also, if you have any family history of breast cancer when your mother, sister, nani or masi has detected then you have a higher risk of developing  it too.  If you notice any lump in the breast or abnormal swelling then please do not ignore it, immediately go for the screening tests.

2. Lung Cancer: Lung cancer is one of the most common form of cancer worldwide. Symptoms of developing lung cancer can be chronic cough, blood in sputum, change in voice, weight loss or distant symptoms like bone pain or seizure etc. The most common cause of lung cancer is smoking, tobacco consumption, urban pollution, chulha cooking in villages.

3. Cervical Cancer: Cervical cancer develops in women who menstruate early, marry early, having sex with multiple partners; many children and poor anti natal care, as well as poor genital hygiene are likely to get this cancer. According to WHO, cervical cancer is the second most common cancer in ladies. Do not ignore symptoms like abnormal vaginal bleeding pain during sex or foul smelling discharge.

4. Throat cancer: It refers to the cancer of the mouth, tongue and oral cavity. Oral cancer has been diagnosed in Indian males excessive tobacco chewing or smoking which in India is more of a tradition than style statement. Any chronic ulcer in mouth or change in voice or difficulty in swallowing or any lump in neck should be suspected to be cancer especially in tobacco users.

5. Prostate Cancer: It is been diagnosed in a man’s prostate, a small walnut-shaped gland that produces seminal fluid. This gland is very cancer prone with increasing age. Common

Symptoms include frequent urination, blood in urination, sense of incomplete evacuation, fatigue and back ache.