According to the Global Road Safety Report, 2015, by World Health Organisation, India accounts for more than 200,000 deaths due to Road Traffic Accidents (RTAs). Blame it to rash driving, not obeying the traffic rules, not wearing seat belts or helmets, and jaywalking, in India, one precious life is lost in RTA, every four minutes. Thus on an average 377 people including 16 children die of RTA every day here.In a one of its kind initiative, Columbia Asia Hospitals, in association with the Bangalore Traffic Police, awarded 3 Good Samaritans, and felicitated 10 others (in the individual category) for helping accident victims, get medical attention and saving their lives. Awards were also given to Organisations who have worked towards improving road safety. This is the first annual property of Columbia Asia Hospitals. 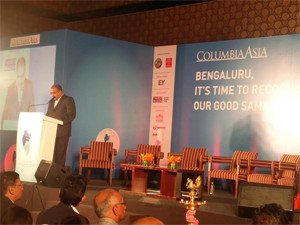 “The Good Samaritan guidelines are encouraging people to come forward and help the victims without any fear of being subjected to any criminal or civil liability. However, not many are yet aware of these guidelines. Being in the healthcare industry, we thought of taking a proactive step in ensuring that less lives are lost in RTA. Good Samaritan Awards is our first attempt towards this,” said Mr. Tufan Ghosh, CEO, Columbia Asia Hospitals

“The entire process of Good Samaritan Awards was a rigorous one which was started about four months ago. Ever since we have received several applications from individuals and organisations, who have been Good Samaritans. We appreciate all of them for extending their helping hand to save RTA victims. After evaluating each and every application, after vetting various parameters, our esteemed panel of judges have selected the top three Good Samaritans, who were awarded today and ten others were felicitated,” said Dr. Nandakumar Jairam, Chairman and Group Medical Director, Columbia Asia Hospitals.

G. Kumar Naik, Commissioner, BBMP spoke about the increased number of vehicles plying on Bangalore roads and the condition of the roads in the city leading to accidents; and various solutions to improve the situation.

During the panel discussion Mr. R.Hithendra, Additional Commissioner of Police (Traffic), Bengaluru talked about how road traffic accidents are a major concern in Bangalore. He also spoke about the various initiatives BTP is taking to ensure easy and safe commuting on Bangalore roads. He stressed upon the fact that the Good Samaritan will be helped by the police.

“BLS goes a long way in saving lives during emergency situations. The steps that we take while attending an emergency can have a deep-rooted impact in saving the life of a patient. Considering the road traffic accidents and other medical emergencies, ideally every citizen should be trained in BLS,” said Dr. Nandakumar Jairam, Chairman and Group Medical Director, Columbia Asia Hospitals.

Mr. Ramesh Arvind, Kannada actor spoke about the role of the film industry in creating awareness of the subject.

Mr. Pranay Jivrajka, Chief Operating Officer, Ola highlighted the fact that carpooling is a necessity today. Moreover all cab drivers should be trained in BLS so that they can help the RTA victims.

Mr. Jagannath MS. CFO, Columbia Asia Hospitals, while thanking the panelists, the jury, the media and all those who have helped making the event a success pointed out that each and every life is precious and there is no other deed of greater nobility than saving a life.

Columbia Asia’s Good Samaritan Awards is an earnest step towards creating awareness amongst the public about the support that can be given to the fellow citizens who are in need. The hospital authorities are hopeful that this Good Samaritan Awards will motivate citizens to take a step forward and help RTA victims get medical attention.