Speaking on the occasion, the Health Minister stated that for any innovation we must think of scale, skill and speed as has been said by the  Prime Minister Narendra Modi. “Patient satisfaction is the ultimate test for assessing quality of services, provided by a 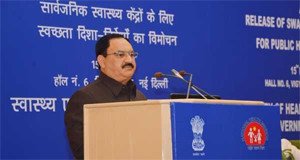 healthcare facility. To further build upon the gains so far, we are now making a paradigm shift and expanding the programmes from grassroots upwards to build the continuity of care” stated Nadda while launching the new initiative.

The Health Minister informed that the ICT-based Patient Satisfaction System (PSS) “Mera Aspataal / My Hospital” for implementation in public and empanelled private hospitals, is envisaged to empower the patient by seeking his / her views on quality of experience in a public healthcare facility. He further added that a multi-channel approach will be used to collect patients’ feedback i.e. web portal, mobile application, Short Message Service (SMS), Interactive Voice Response System (IVRS). “I am sure that ‘Mera Aspataal’, together with the Kayakalp awards, as part of “Swacchata Abhiyaan” will spur the States in a spirit of friendly competition to get highest ratings for all their facilities”, the Union Health Minister added.

Nadda reiterated that under the guidance of the Hon’ble Prime Minister, the Ministry has launched the Pradhan Mantri Surakshit Matriva Abhiyan (PMSMA) to provide fixed day assured quality ANC services to pregnant women on the 9th day of every month across the country. “These services will be provided by obstetricians and physicians. A key pillar of this program is voluntary partnership of private doctors. Prime Minster has appealed to the private sector to join in and contribute their services for providing antenatal care to poor pregnant women,” Nadda elaborated.

Speaking on the occasion, Nadda stated that persistent and intensive focus on maternal and child health has yielded dividends. Besides sustaining India’s polio free status, India has successfully validated Maternal & Neonatal tetanus elimination in May 2015, well before the global target date of December, 2015. “What is noteworthy is that India’s Under-5 Mortality Rate and Maternal Mortality Ratio declined at a higher pace than global average,” Shri Nadda added.

Appreciating the National Health Mission, Kamineni Srinivas, Minister of Health, Medical and Family Welfare, Government of Andhra Pradesh, stated that health of Indians has taken a big leap with NHM. The Minister highlighted various steps taken for pregnant women, reducing Infant Mortality Rate, Maternal Mortality Rate and reducing out-of-pocket expenditure for the patients. He also appreciated the Centre’s help for free drugs and diagnostics for the poor and telemedicine schemes. “There is an overall improvement in hospitals. We must learn from each other and improve our strategies collectively,” the Minister said.

C K Mishra, Secretary (HFW) said that let us try to do something different and stressed on the need to learn from experiences. The Health Secretary added that the ‘how to’ has to come from within us. He further said that this is an occasion to celebrate our successes and move ahead to complete the unfinished agenda.

The Union Health Minister also released operational framework on management of common cancers, Guidance Note for Outsourced Call Centre for tele-consultation, grievance redressal and providing information about schemes. The Health Minister also gave away awards to the states on the basis of Health Indicators and Service Delivery. The best performing large states for decline in IMR was given to Haryana and West Bengal. In this category the best performing small states were Nagaland and Tripura. Similarly, for service delivery in public health facilities Tamil Nadu and Andhra Pradesh were awarded amongst large states and Sikkim and Himachal Pradesh were awarded amongst small states. Best performing Union Territory was Dadar and Nagar Haveli.