The Organisation of Pharmaceutical Producers of India (OPPI) hosted its Fifth Healthcare Access Summit today, supported by the Ministry of Health and Family Welfare, and the Department of Pharmaceuticals, Ministry of Chemicals and Fertilisers. The theme of the summit was ACT (Awareness, Capacity building and Treatment) on Non-Communicable Diseases, (NCDs); discussions centered around addressing the fast-growing risk of NCDs and measures to contain this disease burden. 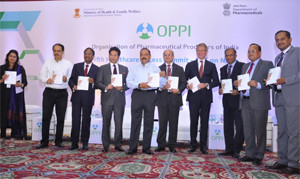 The Summit brought together government officials, policy-makers, leaders from the healthcare and pharmaceutical industries, global healthcare experts and other distinguished professionals. Participants discussed diverse aspects of tackling the NCD challenges and potential solutions, at a day-long event.

This attention to NCDs is being structured on four grounds: the scale of the challenge, the World Health Organisation’s (WHO) Global Action Plan to contain NCDs, the need for a strengthened patient centric healthcare system and a roadmap in the form of a Declaration, at the Access Summit.

First: Over the past decades, rising income levels and increased life expectancies have been a feature of Indian economic and demographic growth. NCDs pose a huge challenge to the country’s healthcare system. NCDs, including cardio-vascular diseases, cancer, diabetes, and chronic lung diseases, account for more than half the deaths in India.

Today, India is being referred to as the ‘diabetes capital of the world.’  Addressing the summit, Mr Lars Rebien Sørensen, President and Chief Executive Officer Executive, Novo Nordisk said “Diabetes is a global challenge. Through this summit, we are looking forward to engaging with all the stakeholders in the fight against diabetes. As an industry, we should collaborate with likeminded stakeholders in order to identify the best interventions, the most optimal healthcare responses and to ensure people with diabetes have access to the right treatment at the right time in the right way.”

Speaking at the Summit, cricketing hero, Sachin Tendulkar, Changing Diabetes® Brand Ambassador for Novo Nordisk said, “The diabetes pandemic is a cause for concern in India and around the world. It is an enormous public health challenge that calls for countries of the world to unite together with polices aimed at curbing the disease. Changing Diabetes movement in India pioneered by Novo Nordisk has been instrumental in creating awareness about the disease and timely intervention. Let’s control it before it controls us.”

Second: In line with WHO’s Global action plan for the prevention and control of NCDs 2013-2020, India is the first country to develop specific national targets and indicators aimed at reducing the number of global premature deaths from NCDs by 25% by 2025. Dr Shailesh Ayyangar, President, OPPI, and Managing Director, India & Vice President, Sanofi India said, “Indeed, we have many healthcare challenges in our country, but we also are very proud that many healthcare indices look much better today, as compared with 50 years ago. We have successfully won the battles against dreaded leprosy and polio.  However, NCDs are emerging as a grave public health concern. It would need collective will and commitment of all stakeholders to work collaboratively to halt the onslaught of NCDs. OPPI member companies have been working closely with Government and other stakeholders in the herculean task of enhancing awareness about NCDs and engaging in patient education and support programmes to ensure better patient outcomes.”

Third: Reiterating the importance of the patient at the core of all activities, the ‘KPMG-OPPI report on healthcare access initiatives’ was released at the Summit.  The report presents the current healthcare scenario in India, and the potential future burden should there be a further delay in implementing access initiatives. It also summarises the various interventions undertaken by OPPI member companies towards improving patient access to healthcare.

Kanchana TK, Director General, OPPI said, “Our healthcare system should be patient-centric. An integrated patient-oriented approach, combined with a universal chronic disease management framework is imperative. We need to ACT now on NCDs. Restructuring and strengthening healthcare systems have resulted in a decline in the incidence of infectious disease.  This provides adequate evidence that the same result is possible for NCDs.  Our members fully support Government’s endeavour and initiatives in containing this disease burden, and look forward to working with them to accomplish India’s NCD reduction goals set for 2025.”

Fourth: The Delhi Declaration on Non-Communicable Diseases was announced by renowned endocrinologist Dr Shanshank Joshi, at the Summit.  The Declaration articulates the intention of reducing the burden of NCDs though innovative and sustainable solutions that decrease the social, economic and medical burden of NCDs.  Additionally, the Declaration seeks to achieve the set NCDs and UN’s Sustainable Development Goals (SDGs) 3.4 goals and outlines direct actions that can be undertaken to combat NCDs in India.  More importantly, it serves as an inspiration across all the states of India and the wider region.