Paras Bliss Hospital for Mother & Child, Panchkula, organized a painting competition for school children on the theme: “Save the Girl Child” with a prime focus on generating awareness against the misuse of pre-conception & pre-natal diagnostic technique, and the resulting female feticide or sex-selective abortion.

The event, that took place on July 23rd evening, at the hospital premises, saw a participation of over 100 students from Kidzee School and Satluj School of Panchkula. The contest was divided into 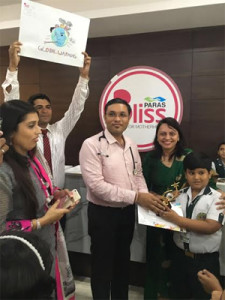 two categories — participation of children between the ages of 4 to 7 years and 8 to 10 years.

Speaking on the occasion Dr Rishi Mangat, Center Head, Paras Bliss Hospital, Panchkula said “Through this programme, the hospital is making every effort against the cultural and social sex-selective abortion or female feticide, by creating a friendly environment for every girl who comes into the world. The time has come to show a spirit of humanism by ensuring community participation and greater involvement of younger minds in rendering an equal-opportunity environment to every girl child of our nation.”

The evening was rounded off with a prize distribution ceremony, where attractive gifts were distributed to all the participants. In addition, the children were also given refreshments during the contest. Parents accompanying the children too hailed the noble concept of the hospital and hoped for a secure future for the girl child.

Dr. Shilva, Consultant Gynecology, Paras Bliss Hospital,Panchkula stressed on the fact that such social activities are the best medium to generate community awareness about major issues and the hospital would continue organizing such activities till the ultimate goal is reached.