For the past 25 years, Gurgaon resident Poonam Mehta was living with persistent pain all over her body, accompanied by constant tiredness, general weakness and lethargy. However, despite consulting numerous doctors and referring to different branches of medicine, her condition kept worsening.

Poonam was finally diagnosed with Lupus at Paras Hospitals, 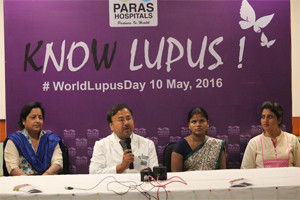 Gurgaon where doctors were able to get a hold of the root cause of her persistent illness and eventually started her on treatment.

At a press conference to mark World Lupus Day, doctors at Paras Hospitals, Gurgaon highlighted a number of such cases and pointed to the need of raising awareness about this disease, which destroys the body’s immune system and the patient’s quality of life, but is often mistaken for other ailments or is not diagnosed at all.

In the case of Poonam, not only the constants pangs of pain disrupted her normal daily life but also restricted her movements, and made every day a painful affair. She tried to seek relief through multiple sources, consulting multiple doctors, undergoing treatments like naturopathy, homeopathy and ayurveda, but none could provide her any relief in the absence of a diagnosis.

Considering her deteriorating condition, one of her friends recommended her to Dr Indrajit Agrawal, HOD, Rheumatology, Paras Hospitals, Gurgaon who finally concluded the condition to be Lupus.

If untreated, Lupus can cause damage to the internal organs of the body including brain, heart, kidney and skin. Occurring in about 3.2 per 100000 people in India, the disease is caused when the immune system of the body starts attacking the healthy cells instead of fighting with foreign cells such as viruses, bacteria and germs. Lupus is a potentially fatal disease.

“Lupus is a complex condition. The awareness about the condition is low not just among the masses but also in the medical fraternity. The common signs and symptoms of Lupus are achy and painful joints, prolonged fatigue, skin rashes, anemia, butterfly shaped rash on face, photosensitivity, unusual hair loss , purple fingers and mouth ulcers, to list a few. Different manifestations of the same disease often baffle clinicians with other diseases like TB,” said Dr Indrajit Agrawal, HOD, Rheumatology, Paras Hospitals, Gurgaon.

28-year-old Beyant Kaur who was misdiagnosed with arthritis earlier. The trouble began when she felt pain in her fingers so much so that she was not able to even hold a pen. The pain then swiftly spread to other joints of the body, to which the arthritis medication did not provide any help. Following her diagnosis with lupus at paras hospital she is on regular treatment and is able to lead a normal life.

Reena Devi used to be hospitalized on numerous occasions with fever, anemia and low platelet counts. She had a marked deterioration in one such occasion requiring ICU admission. She had a very rare complication of Lupus called “Macrophage Activation Syndrome” where the outcome is usually fatal. “Reena is indeed very lucky as she not only survives her illness and doing very well at present, quoted Dr. Indrajit

“The symptoms associated with Lupus can periodically get worse (flare-up) and then improve. There is no established cause of Lupus. However, it is believed that the lupus is caused due to few environmental and some hereditary factors. This auto immune disease affects women more than men,” added Dr. Indrajit Agrawal.