Mumbai-based company announced today that it has closed a $4 million Series A from SAIF Partners, which it will invest in caretaker training and its technology platform.

Founders Vipin Pathak, Abhishek Tiwari, Garima Tripathi, and Pranshu Sharma launched Care24 in December 2014 after they realized how difficult it is to find qualified caregivers for their aging family members. 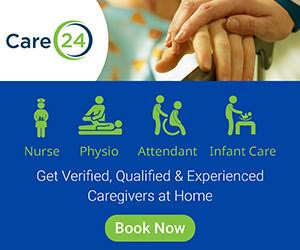 Many families face the same dilemma. There are now more than 100 million Indians aged over 60 and that number is expected to triple by 2050. Multiple generations traditionally lived together and children took care of their aging parents, but that is changing now as more Indians move to other cities to seek job opportunities.

Care24 conducts background checks on certified nurses, physiotherapists, and attendants before adding them to its platform.While the company’s current focus in on geriatric care, Care24 is currently adding more segments. Its providers help patients with health concerns ranging from routine, like blood pressure monitoring, to illnesses that require hospitalization or around-the-clock care. Care24 plans to build more educational features into its technology platform so providers get instructions about how to care for people with specific conditions, like knee fracture or paralysis.

The company serves about 4,000 patients a day. Pathak says Care24 is able to handle that volume because of its technology platform, which allows carers to access training and communicate with clients using only their mobile devices. As the startup scales up, it will integrate connected devices, like health sensors, into its platform so providers don’t have to make home visits to conduct routine checks, like blood pressure readings.

Other home healthcare companies in India include Portea, which has raised $37.5 million from investors including Accel Partners, Healthcare at Home India, India Home Healthcare, and Nightingale’s. Pathak says Care24 wants to differentiate by not only having a large pool of providers to pick from, but also improving its technology to match patients with carers as quickly as possible and improve communication.