Winter is not only the season of chills and shivers but of allergies like asthma, coughing, itchy eyes and nose, runny nose, sneezing or watery eyes. Often the common cold, coughing and sneezing is confused with effect of change in season. However, it should be noted that while cold is a seasonal affair, allergies tend to persist for a longer period, and the only way to prevent them is by identifying triggers and avoid them. 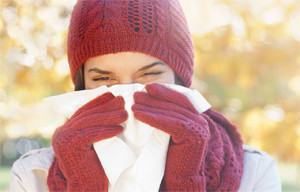 With onset of winter, while the site of people sneezing and coughing becomes a common sight, doctors at Columbia Asia Hospitals spread awareness about the probable allergies, their symptoms, respective precautions and importance to recognise the triggering factor for an allergy.

Due to the similar symptoms, winter allergies are most of the time confused with common cold during the season. However, a winter allergy could be identified by its triggering factor. While there could be many reasons in a person to trigger an allergy, doctors cite family history as the strongest factor in the proliferation of the phenomenon.

“Most of the Indians are allergic during winters. A slight drop in the temperature leaves many people coughing and sneezing. While in many, the health issues could be due the change in the season as during the cold season, your resistance and immunity levels are low. However, in many the issues could be a hint of winter allergies. Awareness about winter allergies is very low in India. Only the people suffering with winter allergies know about the cause and the triggering factors,” said Dr. Deepak Verma, Consultant, Internal Medicine, Columbia Asia Hospital Ghaziabad.

Winter allergies are triggered by the allergens present in the air that we breathe. You can avoid winter allergies by identifying the trigger. We often consider symptoms of coughing, stuffed and runny nose, itchy and watery eyes, sneezing and even the dark circles under eyes as normal effects of winter, when they are effects of allergies.

“Weather irritants like pet dander, mildew and mould are present in the air throughout the year, but the reason they become active in winters is because people shut all the windows with room heaters and temperature controllers switched on to avoid cold. The warm atmosphere becomes a perfect environment for mould and mites to breed. The reactions of these allergens can be controlled only if you understand what stimulates these triggers. One should consult a doctor if the symptoms last for more than a week,” said Dr Verma.

It is advisable to use follow the below preventive measures for keeping allergic reactions at bay:

Eat smart: Allergic responses to certain foods may cause a number of symptoms ranging from eczema to asthma. Common culprits are milk, yoghurt, cheese, ice cream, banana, cucumber, and eggs. Fruit juices and green tea are rich in antioxidants that help reduce allergies.

Swear off smoking: Cigarette smoke contains a number of toxic chemicals. People with allergies are more sensitive to cigarette smoke than others. Common symptoms of smoke irritation are burning eyes, coughing and shortness of breath.

Sidestep sinusitis:  One of the main symptoms of allergies is a swollen nasal passage. Sinus infections bring along a variety of unpleasant symptoms: pain and tenderness in sinus areas, fever, headaches and sore throat. Help your body avoid sinus infections; get plenty of rest and drink lots of water.

Beware of the sun: Remember winter sun can be as dangerous for the skin as summer sun. Sunscreen can help protect you from the harmful effects of ultraviolet radiation. Avoid wearing perfumes in the sun as they react to sunrays. Contact you doctor if you get rashes.

Get omega-3s:  If you suffer from food allergies, then you may want to consider taking Omega-3 fatty acids, which contain natural anti-inflammatory agents. Good sources of Omega-3 are soyabean, pumpkin seeds, walnuts and salmon.