Jain, a B. Tech in Chemical Engineering from Indian Institute of Technology-Kanpur, will receive the honour along with 16 other winners of the National Medal of Science and National Medal of 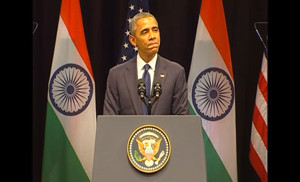 Technology and Innovation at a White House ceremony early next year.

A White House announcement on Tuesday described the medals as “our nation’s highest honours for achievement and leadership in advancing the fields of science and technology.”

“Science and technology are fundamental to solving some of our nation’s biggest challenges,” Obama said.

“The knowledge produced by these Americans today will carry our country’s legacy of innovation forward and continue to help countless others around the world. Their work is a testament to American ingenuity.”

Awarded annually, the National Medal of Science created in 1959 recognizes individuals who have made outstanding contributions to science and engineering.

Jain is regarded as a pioneer in the area of tumour micro-environment and widely recognized for his seminal discoveries in tumor biology, drug delivery, in vivo imaging, bioengineering, and bench-to-bedside translation.

These include uncovering the barriers to the delivery and efficacy of molecular and nano-medicines in tumors; developing new strategies to overcome these barriers; and then translating these strategies from bench to bedside.

A mentor to more than 200 master’s, doctoral and postdoctoral students from over a dozen different disciplines, he has received more than 75 awards from engineering and medical professional societies/institutions.

Jain received his bachelor’s degree in 1972 from IIT, Kanpur, and his MS and PhD degrees in 1974 and 1976 from the University of Delaware, all in chemical engineering.