In India, nearly 40% of all children are stunted–of extremely low height for their age–and nearly 30% are underweight. A new study from Harvard T.H. Chan School of Public Health has now pinpointed the five top risk factors responsible for more than two-thirds of the problem.

The study–the first to comprehensively analyze and estimate the relative importance of known risk factors for child undernutrition–appears online in Social Science & Medicine. 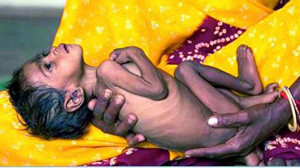 Examining an array of 15 well-known risk factors for chronic undernutrition among children in India, the study found that the five top risk factors were essentially markers of poor socioeconomic conditions as well as poor and insecure nutritional environments in children’s households.

Specifically, using data on nearly 29,000 children aged 6-59 months from the 3rd India National Family Health Survey, conducted in 2005-06 (the latest data that is publicly available), the researchers found that the five most important predictors of childhood stunting and underweight were:

Meanwhile, factors such as Vitamin A, breastfeeding, use of iodized salt, improved water and sanitation, and even immunization–all currently high priority interventions in the global discourse on addressing undernutrition–accounted for less than 15% of the cases of undernutrition.

“There is an immediate need to not waste time and resources on short-term and ‘doable’ interventions,” said S V Subramanian, professor of population health and geography and senior author of the study. “While asking people to change behaviors and offering piecemeal solutions might provide some short-term relief, such strategies cannot be substituted for the urgent need to improve food and livelihood security.”

Iván Mejía-Guevara of the Harvard Center for Population and Development Studies, and Daniel Corsi, previously a fellow at the Center, contributed to the article.

Harvard T.H. Chan School of Public Health brings together dedicated experts from many disciplines to educate new generations of global health leaders and produce powerful ideas that improve the lives and health of people everywhere. As a community of leading scientists, educators, and students, we work together to take innovative ideas from the laboratory to people’s lives–not only making scientific breakthroughs, but also working to change individual behaviors, public policies, and health care practices. Each year, more than 400 faculty members at Harvard Chan School teach 1,000-plus full-time students from around the world and train thousands more through online and executive education courses. Founded in 1913 as the Harvard-MIT School of Health Officers, the School is recognized as America’s oldest professional training program in public health.