In India most of the metros hospitals have world-class infrastructure, processes and outcomes. However, 70% of the healthcare infrastructure is confined to the top 20 cities of India. In order to reach the remaining population, innovations in healthcare products and delivery are required.

Healthcare systems predominantly differ in means, methods and approach, but all confront mediocre health outcomes and a steeply escalating cost curve that is unsustainable in the long term. Offering affordable healthcare without compromising access to care requires innovative new products and care options.

Healthcare in India provides existing and fresher’s with a unique opportunity to achieve innovation, differentiation and profits. In the next decade, increasing consumer awareness and demand for better facilities will redefine the country’s second largest service sector employer.PwC understands the healthcare system as well as the dynamics that drive it.

The system is not just developing rapidly but also continues to expand its coverage, services and expenditure in the public as well as private sectors. This is creating a large market for healthcare-related IT solutions.

The Indian medical device and equipment market is expected to grow to around US$ 7.8 billion by 2016, growing at a compound annual growth rate (CAGR) of 15.5 per cent, according to a report . This market is currently the fourth largest in Asia with 700 medical device makers, and ranks among the top 20 in the world, as per data.

The hospital and diagnostics centre in India received foreign direct investment (FDI) worth US$ 2,057.29 million, while drugs & pharmaceutical and medical & surgical appliances industry registered FDI worth US$ 11,391.03 million and US$ 720.41 million, respectively during April 2000 to September 2013, according to data provided by Department of Industrial Policy and Promotion.

On the back of continuously rising demand, the hospital services industry is expected to be worth US$ 81.2 billion by 2015. In addition, the Indian hospital services sector revenue is expected to increase at a CAGR of 20 per cent during the period 2012–17, generating immense possibilities for players in the market, according to a RNCOS report titled, ‘Indian Medical Device Market Outlook to 2017’.

The Indian health care sector is turning out to be a hot investment destination for private equity (PE) and venture capital (VC) investors across the globe. The past month, December 2013, has seen large PE investments in Gland Pharma, Medanta Medicity and Emcure Pharmaceuticals with three global PE giants – KKR, Carlyle and Bain Capital – investing $200 million, $158 million, and $114 million in the companies, respectively.

A recent Bain & Company report said: “Growth in India’s health care sector has its roots in a number of factors, from ever-rising demand to government support. It is a vibrant space and one that holds many attractions for both promoters and investors.”

“The healthcare sector is growing at a 15 percent CAGR and expected to touch USD 158.2 billion by 2017,” Equentis Capital said in its report.

The factors behind the growth is rising incomes, easier access to high-quality healthcare facilities and greater awareness of personal health and hygiene, report said. 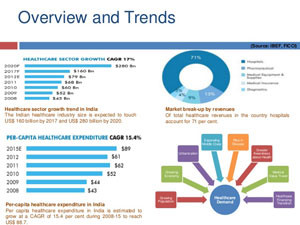 The private sector has emerged as a vibrant force in India’s healthcare industry, lending it both national and international repute.
$158.2bn in 2017’

The private sector has emerged as a vibrant force in India’s healthcare industry, lending it both national and international repute..

Over the years, health insurance is gaining momentum in India; gross healthcare insurance premium is expanding at a CAGR of 39% .Strong mobile technology infrastructure and launch of 4G is expected to drive mobile health. Industry to reach $0.6 billion by 2017, the report said.

Telemedicine is also a fast emerging sector in India. This market in India is expected to rise at a CAGR of 20% to $18.7 million by 2017. With increased privatization, the healthcare sector has also witnessed rise in FDI inflows. India’s primary competitive advantage over its peers lies in its large pool of well-trained medical professionals and cost effectiveness ofsurgery which is one-tenth of that in the US or Western Europe.

The following are some of the major investments in the sector:

New England Journal of medicine calls this new breed of growing patients as Medical Refugees. They use low cost destination like India for life saving surgeries (Milstein and Smith, 2006). Thus, with established edge in surgical treatments, India is poised to play an important role in one of the world’s fastest growing industry of Medical Tourism. “

Today medical tourism is seems to be promoted by every country around the world. Though the reality is that in most cases they offer sub- standard facilities and limited skills or qualifications. India has tens of thousands of skilled physicians and nurse practitioners. Over the last two decades, the economic boom in India has led to the building of medical facilities & infrastructure that rival the very best then the western medical care that the west has to offer. Many of the physicians that practice in these hospitals and clinics have returned (to India) from the U.S. and Europe, leaving behind successful practices.
With India’s top rated education system churning out 20,000-30,000 doctors and nurses every year and with half a dozen world class medical cooperations serving medical tourists, the above predictions does not seem to be a distant reality, provided the stake holders initiate the right move in the right direction.

India’s universal health plan that aims to offer guaranteed benefits to a sixth of the world’s population will cost an estimated Rs 1.6 trillion (US$ 25.73 billion) over the next four years.

Some of the major initiatives taken by the Government of India to promote Indian healthcare industry are as follows:

A country full of opportunities for players in healthcare, India has lately becoming one of the high end destination for medical tourism providing state of  art diagnostic services, nursing facilities and  technology driven healthcare, thus catering to a greater population. Besides, Indian medical service consumers have become more conscious towards their healthcare upkeep. The diagnostic lab services have been witnessing an increase in the number laboratory tests being outsourced to India. The coming years will see a rise in the diagnostic services market.