The agency long focused on deciding whether mHealth apps make the grade has launched its own app to help clinicians find the latest information on certain drugs.

The U.S. Food and Drug Administration’s DrugShortages app, available on iTunes and Google Play, is designed to give users the latest information on a drug’s availability, identifying shortages, resolved shortages and discontinuations. It’s part of the FDA’s “Strategic 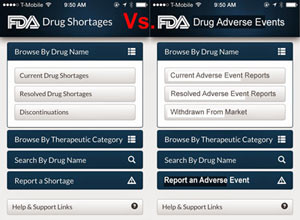 Plan for Preventing and Mitigating Drug Shortages,” which was launched last October.

“Drugs in short supply can delay or deny needed care for patients,” FDA officials said in a press release announcing the app’s availability. “Drug shortages may also lead health care professionals to rely on alternative drug products, which may be less effective or associated with higher risks than the drug in shortage.”

“The FDA understands that healthcare professionals and pharmacists need real-time information about drug shortages to make treatment decisions,” Valerie Jensen, associate director of the drug shortage staff in the FDA’s Center for Drug Evaluation and Research, said in the release. “The new mobile app is an innovative tool that will offer easier and faster access to important drug shortage information.”

According to officials, users can look up a particular drug by its name, active ingredient or therapeutic category, and they can also report suspected shortages or other issues to the FDA.