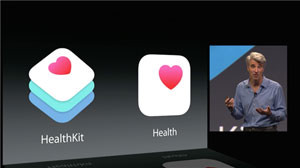 exclusive that reported Apple had originally envisioned the Apple Watch as an advanced health sensing device. By the time CEO Tim Cook unveiled it on stage last September, however, most of its health sensing features had been scrapped. The WSJ story was an interesting look at the device’s evolution during its development — not a big scoop on changes Apple had made since the Watch was revealed.

While the Apple Watch’s actual health-related feature set includes heart rate sensing, activity tracking, calories burned and a reminder to stand up after the wearer sits too long, at one time during its development Apple was working to also include blood pressure tracking, electrocardiogram (EKG) sensing, skin conductivity sensing, and blood oxygenation sensing, according to the WSJ. None of those four will be part of the feature set of the first generation of the device, but none of those were promised on-stage at the Apple Watch’s debut event either.

To sum that all up: On February 16th Apple didn’t scrap any health features from the Apple Watch, that’s just when The Wall Street Journal wrote a story about features Apple once considered including in its Watch. Accuracy issues and possible regulatory concerns led to them to scrap plans for those features several months ago.

Of course, the Apple Watch still features heart rate tracking. The early prototypes included more advanced EKG sensing, according to the WSJ report, but heart rate sensing is one health-related feature the Watch will include.

Last week at the ePharma Summit in New York City it became clear these reports were, perhaps inadvertently, spreading misinformation. Here’s how one speaker, who was introduced as an “mHealth and wearables expert” explained the current state of the Apple Watch, which they referred to repeatedly as the “iWatch”: